Connecting at a Deeper Level with “Danno Budunge”

* Originally written in November 2013 for 'The Nation' newspaper.

Staring down at the city of Colombo from the rooftop of Nelum Pokuna Mahinda Rajapaksa Theater is a magical experience at dusk that day. Above us the clouds were tinged with orange the color coming from the setting sun. Below us was the city, starting to turn on thousands of lights. The breeze blew strongly from the sea, cooling mind and body.

On any beautiful evening, this would have been a magical experience. On that day it was exquisite. The streets below, with much less traffic than usual, stretched out beneath us, a sea of red, grey and green. Hundreds of orange and white flags on either side added an extra beauty to the streets around the Nelum Pokuna. Perhaps coincidentally, the colors of the flags matched the orange tinge of the setting sun, anticipating the street lamps which were being lighted to take its place. On that day, the Nelum Pokuna hosted its largest international gathering, the Opening Ceremony of the Commonwealth Heads of Government Meeting (CHOGM) 2013. It eagerly anticipated another major event, the largest orchestral concert in Sri Lanka ever.

The Nelum Pokuna was a packed house by 7.00pm with both local and foreign invitees arriving on time to witness the spectacle. As the musicians took up their places, one could only wonder at the significance of the event. By any standards, it was an awe inspiring gathering. More than 90 musicians were involved. The largest contingent of around 60 musicians was from The Symphony Orchestra of Sri Lanka (SOSL). There were 30 British musicians, coming from the Purcell School for Young Musicians in London, Chetham’s School of Music in Manchester and the Royal Academy of Music. There were also six Indian musicians. This was a fusion of musicians from three Commonwealth countries. The conductor who had to cope with the challenge of managing these different musicians was Dr. James Ross, who had performed in many countries before, including in Sri Lanka.

Just like the composition of the orchestra, the performance also signified a meeting of East and West. It included Western classics such as “Capriccio Italien” by Tchaikovsky and “Concerto for Viola” by Max Bruch. Two soloists, Robert Plane and Ashan Pillai performed in the latter piece. The orchestra also performed “Mars” and “Jupiter” from “The Planets” by Gustav Holst. Dr. Ross introduced Holst as a man of the Commonwealth, telling us that he had studied Sanskrit and Indian mythology. Some of his compositions, including “The Planets” were inspired by his studies on India. 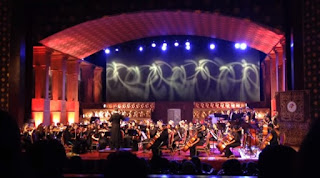 The centerpiece attraction of the concert was a song which has become an integral part of Sri Lanka’s culture; “Danno Budunge.” John de Silva composed the song for his drama “Siri Sangabo” 110 years ago in 1903. It was said to have been inspired by a composition of a Lao-Indian monk V. Laoji. Many see the elements of Church music in this composition and it has actually been arranged as a Christian Hymn, “Hymn for Ceylon.” This Buddhist and Christian connection has made “Danno Budunge” an ideal piece to be played by an orchestra with members from the East and members from the West.

“Danno Budunge” had initially been included in the middle of the program. When Dr. Ross declared that he was going to start the concert with a piece that almost all of Sri Lankans who had gathered would know by heart, the audience was pleasantly surprised. Dr. Ross briefly described the theme of “Danno Budunge.” Reminding that it was a description of entering ancient Anuradhapura, he invited all foreigners to visit the city one day, to witness the glory of ancient Lanka. And then, they started playing.

It started very slowly, patiently. It was unassuming, slowly asserting its authority over the audience. The audience held its breath, listening to the different sounds and travelling through time. Over vast distances they traveled to the ancient city. Those who have seen Anuradhapura and felt its spiritual attraction must have had a similar feeling, imagining entering Anuradhapura in ancient times. Once the music reached a crescendo and then ended, one yearned for more.

More was to come at the end of the show, when the conductor turned to us, “ I’m sure you would like to listen to “Danno Budunge” once again.” The audience, already intoxicated, cheered their approval. And then, they started playing, again.

Dr. James Ross once told this author that “orchestral music needs to connect at the deepest level with all Sri Lankan people on their terms.” Driven by this concept, Dr. Ross and the orchestra touched a chord deep inside the hearts of Sri Lankans. Through music, they created the glory of ancient Anuradhapura, right in the heart of Colombo.

Posted by Chamara Sumanapala at 8:54 PM