Politics makes strange bedfellows. For example, consider Tokyo's popular former governor Shintaro Ishihara and Toru Hashimoto, mayor of Osaka. The former merged his Sunrise Party with the Japan Restoration Party (JRP) of the latter, despite serious policy differences between the two, such as on the future of nuclear energy in Japan. After the merger, the elderly Ishihara was appointed the president of the party which was led until then by Hashimoto. The JRP, the only national party in Japan which is based outside Tokyo is hoping to be a serious contender in the December 16 election for the House of Representatives in the Japanese Diet. 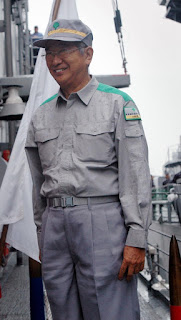 Third parties such as the JRP have been able to exploit the vacuum created by the unpopularity of both the leading parties, the Democratic Party of Japan (DPJ) led by Prime Minister Yoshihiko Noda and the Liberal Democratic Party (LDP) led by former Prime Minister Shinzo Abe. Despite being unsatisfied with the three year rule of the DPJ, the majority of the electorate do not wish to see a return of the LDP. The LDP ruled Japan almost continuously from the 1950s, except for a brief period in 1993-1994 when they lost power, until it was decisively defeated by the DPJ.

Opinion polls suggest that the the DJP and LDP unable to muster even half of the votes between them and more than one third of the voters are still undecided on whom to vote. Therefore, the third parties have a lot to gain from the elections. Many of the small parties are on the political right, seeking the revitalization of Japan. However, except this declared ambition, there is little consensus between them. This has created apprehension over the stability of the government which will be formed after the elections.

However, with the left wing parties largely marginalized, the lower House of the Diet which will be elected will pull Japan's politics to the right. The increased role of the nationalists such as Ishihara, who has a vehemently anti-China policy, will not be conducive towards diffusing regional tensions.
Posted by Chamara Sumanapala at 2:19 PM No comments:

Almost exactly eight years ago, America went to polls to elect a president. What was expected to be a tight race, ended in a relatively comfortable victory to the incumbent George W. Bush. America’s most wanted man and the leader of Al-Qaeda, Osama bin Laden, had an impact on the election through a video tape that was released days before. Apprehensive of their security, some voters swayed to the Bush camp, giving him an advantage in the eleventh hour. 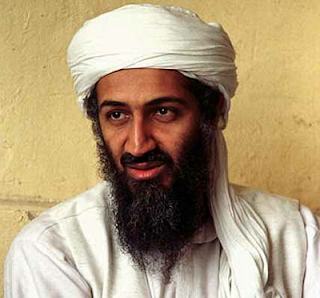 It is eighteen months since the demise of Osama bin Laden. His once feared Al-Qaeda has suffered defeat after defeat. However, the once feared bin Laden is still a man who still has an influence over American politics. If it was not the case, the National Geographic Channel would not have premiered “Seal Team Six: The Raid on Osama bin Laden” just two days before America chose a new president.

Directed by John Stockwell, the movie has been produced by Weinstein Company of Harvey Weinstein and Voltage Pictures. As one of the writers and executive producers of the movie, Weinstein plays a key part in the movie. As National Geographic Channel (NGC) President Howard Owens stated “[T]he success of this premiere would not have been possible without Harvey's driving force and support for this film and our network.” The fact that Weinstein was an ardent supporter and a key fundraiser of president Obama’s reelection campaign was a reason for the Republicans to complain. Adding salt to their injury, the film used several archive footages of Obama himself.

However, the NGC, which premiered the film, is primarily owned by one of the most conservative media tycoons, Rupert Murdoch. The concern for the Channel was to attract the maximum possible number of viewers, which the film achieved, despite millions of homes still not having electricity in the aftermath of Hurricane Sandy. With 2.7 million people watching the show, it was by far the best rated NGC show in 2012 and the sixth highest rated show in the entire 15 year history of the channel. David Lyle, CEO of the channel was very pleased. “We are overwhelmed that the viewers across the country responded en masse to this socially relevant, factually based and entertaining film.” It is clear that if the film was featured after the election, it would not have generated this magnitude of interest.

While some critics have praised the film, others have strongly criticized it. Writing to the New York Times, Alessandra Stanley argued that “[A]s a movie it’s not nearly as gripping as it could be, given how harrowing and suspenseful the actual events were on the night of May 2, 2011.”

However, the film has been made to impress the viewers, generating a sense of pride in the American public. It could not have come at a better moment when the Eastern United States is still dealing with the aftermath of Hurricane Sandy.

In the movie, the culmination of “Operation Neptune Spear”, the death of bin Laden, is followed by total silence, after which the time 1.20 a.m. is shown on the screen, which made me recall the popular TV series 24. Thereafter, the voice of the Commanding Officer of the operation is heard as he informs the White House and the Intelligence team involved in the operation that, “[F]or God and Country, Geronimo is KIA.” The film aptly ended with the other most famous phrase to come out of “Operation Neptune Spear.” President Barak Obama declares that “justice has been done.”

Following the operation, Obama also claimed that bin Laden raid is the “most important single day of my presidency.” Just before the election, opinion polls showed that the majority of the possible voters believed that Obama will be a better Supreme Commander than Romney. While economy was a key concern, security concerns may have also played a part in the reelection of Obama. Even in his death, Osama bin Laden has played his part in American politics through “Seal Team Six: The Raid on Osama bin Laden.”
Posted by Chamara Sumanapala at 9:57 PM No comments:

Why do we do Quizzing?

This article appeared in the souvenir of the 22nd "Blue and Gold Quiz" held by the General Knowledge Club of Royal College on October 30, 2012. 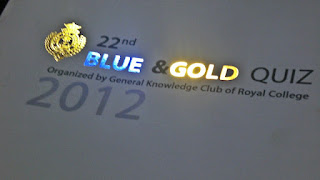 Photo: Souvenir of "Blue and Gold Quiz 2012" by Ramesh Lakruwan.

Quizzing is a game which tests your knowledge in various areas. It’s simply a matter of answering questions thrown at you. Obviously, the more you answer, the more you will score. I have been asked many questions at various quizzes. Yet, when I was asked why I take part in quizzes, I was searching for an answer. With a fair bit of brainstorming, I came up with some answers. However, this may not be a complete list.

Anyone with a fair bit of intelligence can take part in quizzes. But, not all intelligent people are good quizzers and all quizzers are not having a born talent for it. Also, even though practically any sane person can participate in quizzes, it is hard to find a really good quizzer. The main reason is that to be a successful quizzer you have to have a passion for it.

What factors kindle the passion for quizzing? There can be several. Sir Francis Bacon stated one such factor, although not in the same context, in 1597, when he said “knowledge is power.” A knowledgeable person has self confidence and is ready to face the challenges of life. It may help them in their careers and even personal lives. On a personal note, the fact that I have some general knowledge has helped me in numerous competitive exams. General knowledge has become a part of our life.

Obviously, the competitiveness drives a quizzer to take up the challenge. It is also about social interaction. How good it is to interact with different people from different walks of life and yet have a common passion for quizzing? To compete with them and win will be an aspiration which drives on any serious quizzer. The excitement one feels after winning an open quiz or a school level quiz is matched only by a similar success. A success at an open quiz will have some financial benefits. But the recognition, fame and all other perks resulting from a victory will drive any quizzer towards that goal.

However, the most important factor which drives on many quizzers including me is the fun of it. Of course, it is hard work. But, interacting with colleagues, studying, inquiring, discussing, challenging each other, celebrating success, recalling the blunders we made over the years, contemplating the future strategy after a failure are all part of quizzing and part of the fun. Winning is fun. That excitement is worth all the hardship that goes to quizzing. But, even if he or she does not succeed, a passionate quizzer will never lament. At the end of the day, the knowledge we acquire and the fun we have are worth a fortune.
Posted by Chamara Sumanapala at 6:16 PM No comments: