The fourth presidential election in Sri Lankan history was held in December 1999 at a time of increasing political unrest. The People’s Alliance government of Chandrika Bandaranaike Kumaratunga had seen a decline in popular support at the failure in both the war and economy.

The government embarked on the war path after the failure of the peace process in April 1995. Initially the war was successful as the government forces captured several important rebel held areas. The liberation of Jaffna in the latter part of 1995 was a morale boost to the government and a setback for the Liberation Tigers of Tamil Eelam (LTTE). However in the years afterwards, the LTTE won several victories in the form of daring attacks sometimes in the city of Colombo itself. Mullaitivu was captured in July 1996 and Kilinochchi in 1998.

The terror campaign was at its height by 1999. In early November 1999 the LTTE captured Mankulam, a key strategic point in the vital A-9 route to the north, just days after the presidential election was called on October 28. This was predicted to cost the president a considerable amount of votes. Meanwhile, nominations were accepted on November 16 and the date for the election was set for December 21.

The main reason for the call for the early election was the obvious decline in the popularity of the government. The economy was faltering and the war was not taking the intended course. While the president herself remained considerably popular, her government was increasingly becoming unpopular. At this juncture, while the main opposition United National Party was getting strengthened on one end, other parties such as the leftist Janatha Vimukthi Peramuna (JVP), or the People’s Liberation Front, was getting increasingly influential. The JVP had penetrated the student movement in the country and was moving into the labor movement as well.

Meanwhile, 1999 had been an election year with seven provincial council elections being held. Political violence was high and the election in the North Western Provincial Council in 1999 is remembered as by far the most violent election in the People’s Alliance (PA) government era of 1994-2001. The PA won majorities in only two of the seven provincial councils including the North Western PC. In other provinces, it had to rely on the smaller political parties for support. It was a time of political uncertainty to a certain extent as smaller parties including those representing minority communities obtaining the brokering power in some provincial councils as well as the parliament. 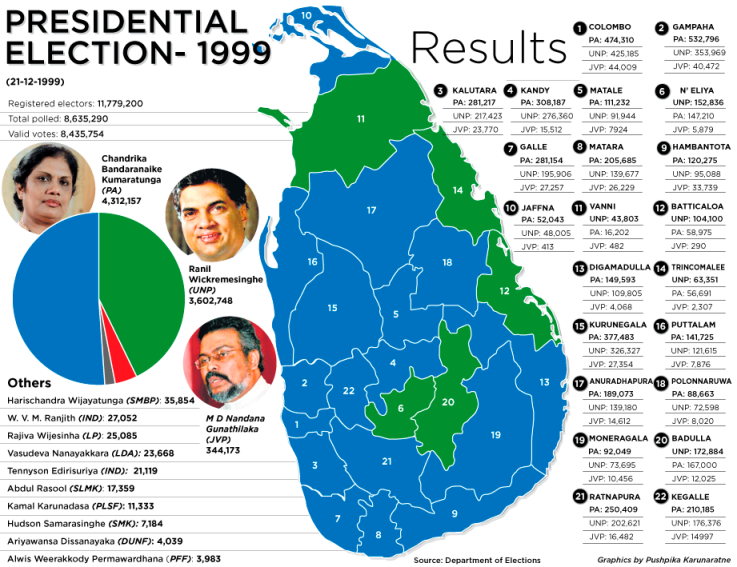 The number of candidates in this election was 13, a higher figure than ever before. The main contenders were President Chandrika Bandaranaike Kumaratunga and UNP leader Ranil Wickremesinghe. Meanwhile, the JVP had come to an agreement with the Nava Sama Samaja Party of Dr. Wickramabahu Karunaratne and the Muslim United Liberation Front, and put forward Nandana Gunathilake as the ‘common opposition candidate of the left.’ Ironically, Vasudeva Nanayakkara, who had joined the PA in 1994 but had later broken away from it, also contested. Some other candidates were contesting to extend their support to one of the two main candidates.

There were two other candidates who had contested when Chandrika Bandaranaike Kumaratunga had won the election in 1994. They were Dr. Harischandra Wijetunga from the Sinhale Mahasammatha Bhumiputhra Party and the independent Hudson Samarasinghe.

Meanwhile, there were two other independents, former parliamentarian Mahiman Ranjith and Tennyson Edirisuriya. The latter argued that all politicians should be rejected and asked the people to cast reject ballots. Ironically, he was to end up receiving more than 20,000 votes.

The election was hotly contested, perhaps than never before. There was a clear possibility of Wickremesinghe winning the vote. Meanwhile the JVP candidacy was also working to help him indirectly as a considerable number of center-left voters were leaving the PA, disillusioned by its relatively unsuccessful record.

On the night of December 18, a private TV channel was to interview the president just before midnight. She was to arrive at the studio from the last election rally at Town Hall Grounds, Colombo. The country awaited in front of their TV screens anticipating the arrival of the president. The president was getting late. As she had this habit of getting late for events, people might have joked that the president was getting late as usual. At that time with no Twitter and Facebook and live streaming on the internet, news was not filtering through as fast as it is today. Only slowly did the country learn of the bomb blast in the Town Hall Grounds, nearly killing the president.

On the same day, another bomb had exploded in the opposition rally, killing several members and supporters of the UNP including Major General (retired) Lakshman Algama. The LTTE was attributed as the perpetrators of the bombs. At least 35 people died that night in the two bomb blasts.

It was later revealed that the president had survived but may lose the sight of one eye. Later she appeared on television, which sparked some outrage in the opposition camp which alleged that she was violating election laws. However, she managed to convincingly win the election with 51.12 percent of the votes. While it was significantly lower than the 62 percent she received in 1994, it was convincing enough.

President Kumaratunga had received the support of the majority of the rural Sinhalese population, carrying all constituencies in Southern and North Western provinces. She also led the race in all seats in the Western Province except within the city of Colombo. Her popularity was still strong in the rural farmer communities. Meanwhile, the Tamil people had not lost hopes in her as an agent of peace, as seen by the election results in much of the government held areas in Jaffna District. For the fourth consecutive time, a presidential candidate of the Sri Lanka Freedom Party or an alliance led by it polled more votes than the UNP in a presidential election. The UNP leader carried Trincomalee and Batticaloa Districts, with the support of the Muslim community, and also won all five electoral constituencies in the Colombo city. The UNP also won the race in the Nuwara-Eliya District and Badulla Districts with thin majorities.

Perhaps the most disappointing performer was Nandana Gunathilake who polled just over 4 percent of the vote. This was surprising as the JVP had done well in the provincial council elections. One explanation given was that the last moment tilt towards the president affected the JVP mostly. Also, since the JVP could not possibly hope to win the election, some who might have considered voting for them in a different election may have not decided to vote for them in this election. The impact of voting for the JVP in a general election or a provincial election was different than voting for them at the presidential election.

President Kumaratunga left for the United Kingdom for medical treatment after the election. She told BBC that she was still a believer of peace and the LTTE leader Velupillai Prabhakaran had “an obsessive fear of peace.” However, after returning to Sri Lanka, she made a television appearance in which she spoke scathingly on almost all her detractors and opponents. This served to intimidate the media and the opposition, perhaps unlike never before in her term as president. It signaled that her second term as president was not going to be an easy ride.