The first reactor of the Koodankulam nuclear power plant (KKNPP) went critical two weeks ago, despite two years of continuous protests by local population. This is the culmination of a process started over two decades ago and the protests against it have taken place almost from the time it was first proposed.

Koodankulam is located north east of Kanyakumari in the coast of the Mannar Bay. The Indo-Soviet inter-governmental agreement for the building of the power plant was signed in 1988 by the Rajiv Gandhi government and the Soviet Union. With the collapse of the latter, the plan had to be put on hold. Although construction started in 2001, it dragged on. Meanwhile, protests against the power plant also took place from the late 1980s onwards.

The main concern of the protestors has been the safety of millions of people living around Koodankulam, a concern which increased manifold after the Fukushima disaster. The People’s Movement against Nuclear Energy (PMANE) points out that there are more than one million people living within a circle with a radius of 30km from the power plant. Opponents of the power plant argue that it is impossible to evacuate such a huge population in an emergency.

Furthermore, it has been alleged that sub-standard equipment has been used in the construction of the plant, which increases the apprehensions over safety. The PMANE states that the equipment and parts have been supplied by “discredited Russian companies such as ZiO-Podolsk, Informtekh and Izhorskiye Zavody.” It point outs that some officers of these companies have been arrested and sometimes even found guilty of fraud. However the plant director R.S. Sundar and other officials are confident that the safety levels are satisfactory.

Protest marches, hunger strikes and other protest activities have been a part of life for the people in Koodankulam for two years. The authorities allege that PMANE is an organization which is manipulated by foreign financial backers. The PMANE hotly denies these charges and states that it is a people’s movement.

One major hope of the protestors was a Public Interest Litigation filed at the Supreme Court of India demanding that all nuclear power plant projects be stopped until safety measures and cost benefit analyses are carried out by independent agencies. However, the Supreme Court decided that Koodankulam could go on, stating that nuclear power is important for sustainable economic growth. The court further stated that the right to life and sustainable development should be balanced. It was of the opinion that various expert groups have stated that there is no radiation risk in the area.

However, the Supreme Court asked the Nuclear Power Corporation of India Ltd. (NPCIL) to comply with all safety measures and submit a report to the court before commissioning the power plant. The NPCIL submitted a report just one day before the initiation of the “boron dilution process” without waiting for the comments of the Supreme Court. Initiation of the boron dilution process marks the power plant going critical, which means it has started the process of nuclear fission reaction. It will be a matter of time before the reactor is fully active.

The Supreme Court judgment has not allayed the fears of the public. Writing an open letter to the Prime Minister of India and the Chief Minister of Tamil Nadu, Major General (retired) S. G. Vombatkere says that the KKNPP went critical “in contempt of people's well-founded fears for safety and health through calculated intransparency to the questions and issues raised by them.” He points out the fact that the NPCIL has not followed the Supreme Court’s directive. In an e-mail correspondence, ‘The Nation’ asked Major General (retired) Vombatkere whether this amounted to contempt of the court. “Though I am not a legal expert, I agree with you that this could be viewed as contempt of court” Vombatkere replied.

Critics also contest the assertion that nuclear power plants are economically viable. The high initial cost, the life span of only about 40 years, costs of maintenance and eventual decommissioning, safely disposing nuclear waste are all costly procedures. This and other concerns are still prevalent in the opponents of the KKNPP. Vombatkere mentions long-term health damage to people who live even up to 50-km away from it, long-term damage to the ocean environment from radioactive discharges and heat dumping, being a constant threat to safety due to substandard components, and being a radioactive blot on the ecosystem even after it is decommissioned as the main concerns.

Meanwhile, the fact that Koodankulam is situated relatively close to Sri Lanka has also raised some concerns in the island nation. In an event of an accident, Sri Lanka is likely to be affected. International Atomic Energy Agency (IAEA) Convention on Nuclear Safety stipulates that if a country is commissioning a new nuclear power plant in the vicinity of another country, the second country should also be provided with appropriate information for emergency planning and response. Indian authorities have reportedly not complied with this clause in the convention, despite being a member of the IAEA.
Posted by Chamara Sumanapala at 8:02 PM No comments:


Just after Sri Lankan president Mahinda Rajapaksa left China concluding a four day official visit in late last May, Chinese president Xi Jinping embarked on an official trip to the Americas. This would take him to four countries including Costa Rica, Mexico and the United States. But his first destination was the small Caribbean island nation of Trinidad and Tobago.

President Xi Jinping held talks with both Anthony Carmona, the president of Trinidad and Tobago and Kamla Persad-Bissessar, the Prime Minister on June 1. Meanwhile, leaders of about eight other Caribbean nations arrived in Trinidad and Tobago to meet the Chinese president. They included several small island nations as well as Guyana and Suriname.

The president of the most populous country in the world chose to visit a geographically distant nation of just over 1.3 million people because of one crucial factor: Energy. Trinidad and Tobago is different from all other small Caribbean island nations due to its large deposits of oil and natural gas. It is considered to be an industrial country largely due to the industries based on fossil fuels.

China is a giant with a growing appetite of energy to sustain her industries. From 1993, when China became a net importer of petroleum, the need for energy has had a persistent effect on her foreign policy. China looked for new markets to acquire energy, sometimes even disregarding differences in political opinion. Meanwhile, she even went as far as escalating maritime boundary disputes with several East Asian and South East Asian countries for the control of regions with possible petroleum deposits.

As far as Trinidad and Tobago was concerned, China was a far away land, despite having diplomatic relations since the 1970s. The Caribbean nation was more close to the United States and Britain economically and politically. Meanwhile she is closer to India and Africa ethnically. But this was no reason for China to deter. She had entered contests of economic competition in a number of developing countries and ousted well entrenched rivals through her sheer weight of economic might. To paraphrase Don Vito Corleone, China made offers which these countries could not refuse.

There have been continuous discussions and speculations about the Chinese involvement in many African countries as well as some Asian countries. Meanwhile, Latin America and the Caribbean have also received increasing attention from the Chinese. In 2001, the then president Jiang Zemin paid a much celebrated tour of six Latin American nations. His successor Hu Jintao also visited the region several times. Therefore, the last fifteen years have seen a growing Chinese interest in the neighborhood of the United States. Little Trinidad and Tobago has also risen in importance for the Chinese. In the last six years, trade between the small island nation and the Asian giant has grown from US $ 174 million to US $ 450 million. China is increasingly asserting herself in the ‘backyard’ of the United States.

The Chinese rationale for the development of relationship in petroleum rich states away from the Middle East is sound. The Middle East is prone to political instability. The trade routes from there to China have two major choke points, the straits of Hormuz and Malacca. The Strait of Malacca was threatened by the activity of pirates just a few years ago. China remembers the earlier occasion when the access to Strait of Malacca was denied them five centuries ago. When the Portuguese captured Malacca in 1511, Chinese trade routes were jeopardized and China, which had a rich maritime history, retreated into a shell and slumbered. What was perhaps the most advanced civilization at the time started its long stagnation.

While the commodities traded are different today, the result will be the same if a resurgence of political instability or piracy interferes with the trade routes from Arabia to China. Without much needed energy, China will stagnate once again. This apprehension has driven them to find new petroleum resources in other regions and Latin America is one of them.

However, China has understood that trade is not the only tool in diplomacy. She has granted a loan to Trinidad and Tobago government to build a new children’s hospital. Meanwhile, a branch of the Confucian Institute would be opened with the aim of propagating Chinese culture in the island nation. With these acts of public diplomacy, China has made her intentions clear. She is there to stay. Do not be surprised if you see some Chinese cultural items in the famous carnival of Trinidad in a few years time.

Posted by Chamara Sumanapala at 11:30 AM No comments:


Leaders of five nations of the Union of South American Nations (UNASUR) gathered in an extraordinary meeting at Cochabamba on July 4 and denounced the forced landing of the presidential plane of President of Bolivia Evo Morales. The plane was forced to land in Vienna after four European countries reportedly denied air space on suspicion that former National Security Agency (NSA) agent turned whistle blower Edward Snowden was on the plane.

In a six point “Cochabamba Declaration” the leaders have stated that the restriction of the freedom of President Morales is a violation of the rights of not only the Bolivian people but of all South American people. They have also declared that this act sets a dangerous precedent in international law. It violates a basic principle in international law, the inviolability of a Head of State. 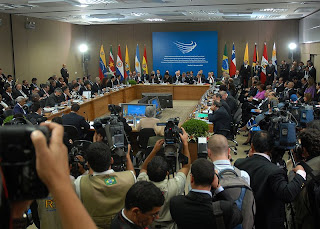 The UNASUR leaders call on the governments of France, Portugal, Italy and Spain to explain the reasons for the decision to prevent the presidential plane of the Plurinational State of Bolivia overflying through their airspace. They also urge the four countries to offer a public apology.

The UNASUR leaders, through the “Cochabamba Declaration” have extended their support for the complaint filed by the Plurinational State of Bolivia to the Office of the UN High Commissioner for Human Rights, for the serious violation of Human Rights and concrete endangerment of Life of President Evo Morales.  The declaration also supports the right of the Plurinational State of Bolivia to perform all the actions necessary steps before the courts and relevant agencies.

The leaders have agreed to form a Monitoring Committee, to take the necessary actions to clarify the facts.
Posted by Chamara Sumanapala at 11:58 PM No comments: