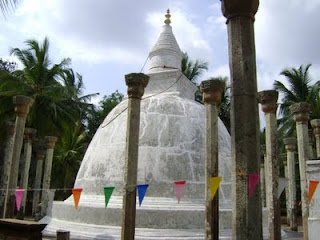 Today, May 17, 2011, is the Vesak full moon (poya) day. For Buddhists, all full moon days are important but Vesak is the most important day. It marks the commemoration of the birth, enlightenment and the parinirvana of the Lord Buddha. Vesak was recognized as an international holiday by the United Nations a few years back, partly due to the work of the then Sri Lankan foreign minister, late Mr. Lakshman Kadiragamar, a Tamil.

The Vesak festival of 2011 is more important as according to the Buddhist history, it marks 2600 years since the enlightenment of Lord Buddha.

At this juncture, 'Buddhism' plays an important role in man's quest for the truth. Many of man's problems were overshadowed by the bi-polar system and the Cold War until 1989, when Communism and Capitalism confronted face-to-face. After 1989, many thought that everything would be fine and were totally dismayed when it did not turn out to be so. Terrorism, religious fundamentalism and other extreme 'isms', along with the impact on the environment, increasing poverty and other social effects have made man rethink about the civilization he has developed so far.

When this happens, man turns back to religion.

Is Buddhism a religion? Or is it an ideology, just like the other numerous 'isms'? If so, what is the importance of 'Buddhism' in seeking the truth.

Lord Buddha was born in an age where man was seeking the truth. There are a number of religious sects said to have been active in the contemporary world of Lord Buddha. What He taught was fundamentally different from other religious sects. Even today, this fundamental difference is evident. Therefore 'Buddhism' is neither a religion, nor an ideology. There is no other teaching compared to Lord Buddha's teachings.

All other religions and ideologies do not offer the path to freedom from the cycle of birth and death, the cycle of sansaara. They are concerned with improving the worldly lives. All politics and religions are more or less following this general objective of making the world a better place according to their believes. Lord Buddha's teachings tell us the 'way of the world' and the path to freedom from the way of the world, the ultimate bliss called 'nirvana'.

The 2600th Buddha Jayanthi is a very good time to rethink about what Lord Buddha taught and make our path to freedom.

May all creatures attain the supreme bliss of Nirvana!
Posted by Chamara Sumanapala at 6:54 PM No comments:

The Death of Osama bin Laden

Obama has declared that Osama is dead.

The manner in which the U.S. authorities have made it public has raised some doubts over the credibility of the news. The U.S. could have done better. But, it really does not matter because bin Laden was politically dead long before he died physically.

The political death of a public figure may or may not coincide with their physical death. People like Che Guevara became more powerful in their deaths than their lives. However, for bin Laden, it was not the case.

Bin Laden was effectively a fugitive for more than a decade. He could find refuge only in Afghanistan, a country he knew like the palm of his hand. But now he was living under the patronage of the Taliban. After 9/11, he had to leave his safe haven and with him fell the Taliban regime. Some leaders of the Talibans never forgave bin Laden and his Arabian cadres for their own demise. The fact that the Talibans have risen back does not change much, as everyone can clearly see that it was the U.S. policies in Afghanistan and Pakistan which made it possible.

It does not mean that bin Laden was an empty figure totally. He had a number of supporters and he still does. His movement, although very much weakened after 9/11, is still active. Once again, it was the U.S. which indirectly helped its resurgence. Before 2003, Iraq did not have Al-Qaeda. After Saddam was toppled, the Al-Qaeda, among others moved in and it was only with great effort and at a great cost that they were suppressed in that country. Al-Qaeda, which was routed in Afghanistan, was given a chance to comeback courtesy of the Americans in Iraq. Also, since the Americans had not finished the Taliban in Afghanistan, the violence there continue. Bin Laden would have been isolated if the Americans had done the right thing at the right time.

Despite these debacles, the U.S. "War on Terror" decimated some Al-Qaeda affiliated organizations and weakened others. Bin Laden himself had to live as a fugitive for so many years. He was nearly a dead man politically.

And the last nail of his political coffin was struck in late December, 2010, in a small country called Tunisia.

Bin Laden had advocated for the removal of pro-Western Arabian despots for years, a feat which his feared Al-Qaeda never even came close to achieve. But, in just a few weeks, two of the strongest despots in Tunisia and Egypt were removed by popular power. What Osama could not do in 20 years was done by the Arabian people in less than 20 days in Egypt. Meanwhile, another despot, in Yemen, is fighting a losing battle to hold on to power. The Arab spring has effectively killed Osama bin Laden politically.

However, it is not the end of the story. What is happening in certain places around the Earth is disturbing to say the least. Al-Qaeda affiliated rebels are said to be a main constituent group of the rebel forces of Libya. Overtly anti-Islamic moves in several Western countries are adding to the troubles.

Osama bin Laden can be resurrected politically and its is the Western powers, more than anyone else, who can determine if they are going to do it or not.
Posted by Chamara Sumanapala at 7:57 AM No comments: