"Remember Wes, if you ball a no-ball, you'll never be able to go back to Barbados!"

Those were the words of West Indies cricket captain Frank Worrell, who was also originally from Barbados, before Wes Hall balled what was to be the last ball of the epic tied test cricket match against Australia. With two balls to be balled, Australia had one run to get with one wicket in hand. Hall made sure he did not ball a no-ball and the match ended with a run out.

Born in Barbados on September 12, 1937, Wesley Winfield Hall is almost 75 years old. He was one of only 9 people chosen to be created Knight Bachelor by Queen Elizabeth II in the Queen's Birthday Honours on her diamond jubilee year.

At his prime, in late 1950s and early 1960s, many a batsman must have trembled when Wes Hall ran up to ball at them. At 6'2, he was quite a giant. Despite using a long run up, Hall was known for his stamina. Once in a test match against England at Lord's, he balled unchanged from one end for 200 minutes.

Beginning his career in a tour of India and Pakistan in the 1958-59 series, Wes Hall became the first West Indian bowler to take a test cricket hat-trick at the third test with Pakistan. He and fellow Barbadian bowler Charlie Griffith created havoc in many test matches with their pace bowling until mid 1960s. Eventually, his age caught up with him and his performance level suffered. He retired from test cricket in 1969 and from first class cricket in 1971.

Known to be a good humoured man, Hall was a very popular cricketer during his playing years. After retirement, he engaged in social activities and in the 1980s he got involved in Barbadian politics. Appointed to the Senate, he was elected to the House of Assembly from the Democratic Labour Party (DLP). The DLP won the election and formed a government and Wesley Hall was appointed Minister of Tourism and Sports in 1987. Wes Hall was reelected to the Assembly in 1991. He is credited with developing the sports tourism of Barbados while serving as the Minister of Tourism and Sport. For his achievements, Hall was endowed with the Lifetime Achievement Award of the Caribbean Tourism Organization.

For two years from 2001, Wes Hall was the Chairman of the West Indies Cricket Board and in that capacity was instrumental in attracting the 2007 World Cup to West Indies.

Wes Hall is also ordained a minister in the Pentecostal church. With his knighthood, he will be known as Reverend Sir Wesley Hall.
Posted by Chamara Sumanapala at 9:02 PM No comments:

The Dissolution of Egypt's Parliament

This weekend, if everything takes place as expected, a new president will be elected in Egypt to succeed the man they have sent to prison days ago. But, the new president will not have a parliament to govern-or fight-with. The country's Supreme Constitutional Court has dissolved the parliament which was elected several months ago.

The country's whole political transformation has been turned, or at least severely hindered by the rulings by the court. In the parliamentary elections, almost one third of the seats were open to individuals not affiliated with the political parties. However, fearing the old guard of Hosni Mubarak's National Democratic Party would target them, the military rulers hastily changed the election law to allow political parties participate in the election in those seats. The court has held that it is unfairly discriminatory towards political independents.

The court has also held that Mubarak's last Prime Minister, Ahmed Shafiq, can stand for the presidential run-off against Muslim Brotherhood's Mohammed Morsi. In April, the Political Isolation Law, was passed by parliament (which is dominated by the Muslim Brotherhood) and enacted by the country’s ruling military council. It was just one month before the presidential election. The law bars anyone who served in a top position during the last 10 years of the Mubarak administration from holding public office for the next decade.

The law banned Shafiq from the race. But the day after it was passed, Shafiq appealed to the presidential election commission and was immediately reinstated. The commission then referred the law to the Supreme Constitutional Court for review. With their ruling on the law, the court allows even the former top Mubarak supporters to run for elected positions in the country. Theoretically, the sons of Hosni Mubarak, who were acquitted of corruption charges recently, can run for elected office.

Al Jazeera reports that Mohammed el-Beltagy, the vice-president of the Muslim Brotherhood's Freedom and Justice Party (FJP), has called the sequence of events a "fully fledged coup" in a post on his Facebook page. But Presidential candidate Mohammed Morsi, the Muslim Brotherhood's presidential candidate, has said in an interview with Egyptian channel Dream 2 that the constitutional court's decision to dismiss the entire parliament did not amount to a military coup. "I love the military forces," he said, adding that the court rulings indicated "there [are] some who seek, strive for, and plan ill against the people".

Some time after protestors took to the streets, calling the verdict to be politically motivated, Mohammed Shafiq held a press conference and declared that the era of "tailoring laws" has ended. Now that he is in the race for sure, the Egyptians will be watching the presidential run-off closely. The outcome of that race will not change the fact that Egypt is moving towards more confusion. 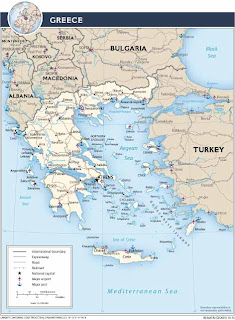 Europe and the rest of the world await the outcome of the Greek election on Sunday, June 17, 2012, with some apprehension. It is just six weeks after the Greek people categorically refused the political parties supporting the European Union backed austerity plans to counter economic recession. In the backdrop of that election on May 6, no political alliance could form a stable government and therefore fresh elections were called for.

At a time, just when new elections were announced, the left wing party SYRIZA seemed to be in a position of defeating the centre right New Democracy (ND). Coming second in the May 2012 election was a huge achievement for the party which was hitherto a very small group. It was its opposition to the austerity measures which transformed the SYRIZA in to a major national force. A victory by the party would have sent the Euro into a new crisis.

However, recently the popularity of the ND has once again improved and many hope that it will once more edge past the SYRIZA in Sunday’s election. Greek banking stocks improved substantially after it was suggested that the ND will once more win the election and a pro-austerity government would come to power again in Greece. As things stand, the ND will not obtain a majority on its own and will have to rely on an ally to form a coalition government. The most likely ally would be the Panhellenic Socialist Movement (PASOK). As things stand, the PASOK is not expected to improve significantly on its performance six weeks ago. Therefore, only a better performance by the ND can open the way to a possible coalition government. If the two parties are unable to obtain a majority, there is a likelihood of the Greeks ending up once more with a hung parliament.

This fear may be one reason why the ND is slowly improving its standing in the political arena after being in a position of getting defeated at the hands of the SYRIZA. Despite its successes, the left-wing party is also not strong enough to form a government on its own. Even if it wins the election, it is doubtful if the potential anti-austerity leftist allies of SYRIZA will be able to win enough seats to form a government.

It would be a real irony if the ND and PASOK are indeed able to form a government. After several months of debating, campaigning and protesting, the Greek people would be back in square one. Nevertheless any government, except an extremist one, will be better than no government.