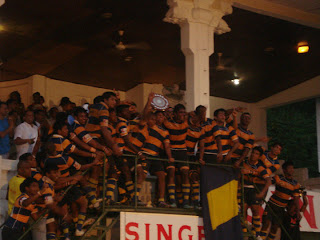 The premier event in Sri Lanka's schools rugby, the Bradby encounter is an annual event between Royal College, Colombo and Trinity College, Kandy. The encounter consists of two matches played in Colombo and Kandy to determine the winner on aggregate. The matches are played on two Saturday afternoons in three weeks. The schools usually engage in another match of the rugby season with a different school on the Saturday in-between.

The encounter was earlier held in August-September. But recently, the Bradby encounter has been advanced to May-June.

Royal College, Colombo and Trinity College, Kandy were the pioneers in schools rugby in Sri Lanka. The first Royal-Trinity rugby match was held in 1920. In 1945, the then Royal principal, Mr. E.L. Bradby proposed to have an annual encounter with two legs. He donated a shield for the purpose, which was, naturally, named after him. From that year onwards, the Bradby Shield encounter has been held very successfully as an annual event. The school which wins the shield in a particular year are presented it at a ceremony held just after the second leg and they get to keep it until the next Bradby.

In early years, Trinity College has been more successful in the Bradby encounter. But in the last few decades, the Royalists have turned the tide to their direction. The culmination of this was the 2002 Bradby which they won by a mammoth aggregate of 83-0.

The venue of the Colombo leg was used to be the Sugathadasa Stadium for a number of years. But with the completion of the Royal College Sports Complex, it became the venue. The Bogambara Stadium at Kandy is the usual venue for the Kandy leg.

The two legs alternate between the venues every year. So, if the first leg is held in Colombo this year, the next year it will be at Kandy.

From the 1950s, it was the tradition for the Royalists to travel to Kandy in an intercity train packed with old boys and students for the Bradby match held there. Hence it was named-what else?-"The Bradby Express." The bradby Express had to be stopped in 1980s due to the security situation in the country. But with the civil war over, the Bradby express made a resurrection in 2010. A special train was booked for the teachers, old boys and students to travel to Kandy and return. Papare bands entertained the Bradby 'pilgrims'. It was continued in 2011 also.

For a number of years, the finance minister of Egypt forgot this lesson. His leader was Hosni Mubarak, who seemed to be the life time president of Egypt. The nephew of former Secretary General of the UN, Yousef Boutros-Ghali was a confidant of Gamal Mubarak, the son and possible successor of the aging Hosni. He may have had grounds to forget JFK's advise because he lived in a virtual dictatorship where you can enjoy almost any benefit if you are a henchman of the leader.

However, just an eighteen-day revolution was enough to change it all. Yousef Boutros-Ghali fled the country. In early June, 2011, he was sentenced in absentia for three decades for squandering public funds and abusing his authority.