Emperors of Japan: A Divine Lineage

This was written on December 20, 2012, to commemorate Emperor Akihito's 79th birthday, which was celebrated on December 23, 2012. Since Akihito is the 125th Emperor of the traditional line of Japanese Emperors, I thought of publishing it here as the 125th blog post of this blog.

King Farouk I of Egypt reportedly said after his abdication in 1952, that “The whole world is in revolt. Soon there will be only five kings left-the King of England, the King of Spades, the King of Clubs, the King of Hearts and the King of Diamonds.” If he had indeed said these words, this shows his inadequate knowledge in history and politics. The first kings of England appeared in the 10th Century in Wessex and the monarchy of England has not been continuous. Playing cards was started in China in the 9th Century. However, in another country, the same imperial family had been in power for reportedly more than 2600 years when Farouk I supposedly uttered those words.

The current monarch of that dynasty, His Imperial Majesty Emperor Akihito of Japan, celebrates his 79th birthday on December 23, 2012. Born in 1933 to Emperor Hirohito (Showa Emperor) and Empress Kojun, he was the first son and the fifth child of the royal couple. Therefore, he became the crown prince when he was born. He experienced the Second World War as a small boy and was evacuated from Tokyo in the height of the American bombing of the city. The fact that he was not an adult may have had a role in Emperor Hirohito’s decision of not abdicating after the end of the war.

After the war, Akihito was tutored on English and Western manners by Elizabeth Gray Vining, who had a lasting impact on the young prince. In 1952, his formal investiture as the Crown Prince was held in Tokyo. Crown Prince Akihito married Michiko Shoda, the daughter of a wealthy businessman, in 1959. She was the first commoner to be married into the royal family in its entire history. 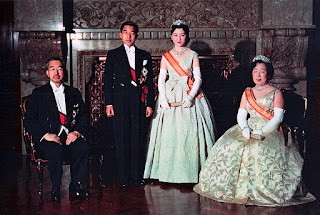 Legend has it that the imperial line is 2672 years old, easily making it the oldest continuous hereditary monarchy in the world. Akihito is the 125th Emperor in this line. It is true that there are no written records to prove the existence of the earlier Emperors. The first non legendary Emperor appears in the 6th Century A.D. Therefore, even if only the non-legendary period is considered, the imperial line has a recorded history of more than 1500 years.

According to legend, Emperor Jimmu, the first to ascend to the throne in 660 B.C., is a direct descendant of the Sun Goddess Ameterasu. This divinity has been one reason for the longevity of the imperial family in power. Although Emperor Hirohito ‘renounced divinity’ the fact remains that the Imperial family of Japan is well above the other families of Japan. The writer and imperial authority Shichehei Yamamoto once wrote that “According to Japanese law, all citizens are required to have their names and abodes officially registered with the authorities. However, the Emperor and the members of the Imperial Family lack both a family name and a family register. For that reason, when Empress Michiko married the then Crown Prince [Akihito], her name was crossed off from her family register.” Therefore, even though the Imperial Household Law is subject to the Constitution of Japan, in practice it seems that it is not the case.

Another reason for the longevity of the Imperial Family is their lack of real political power. The Japanese Emperors, while revered by the people, have had little power throughout the history. For Centuries, until 1868, the country was effectively ruled by military leaders known as shoguns. Emperors were enthroned or abdicated according to the whims of the Shogun. However, as the Imperial Family was divine, the shoguns could not afford to chose an Emperor from another family.

The last of the Shogunates was the Tokugawa Shogunate, which was overthrown in 1868 by the Meiji Restoration. This supposedly saw the power returning to the Emperor. But, as a matter of fact, the Meiji Emperor was used by the families which overthrew the Shogunate to legitimize their rule. Under the Meiji Constitution of 1890, the Emperor was to take advice of the Prime Minister on all political matters. After the end of the Second World War, the powers of the Emperor were curtailed even more.

Although the Emperor does not have any political power many Japanese revere him. The lack of political power itself may have helped for the Emperors to preserve that reverence. They have not mingled with the common people except for in dire or critical situations. The Meiji Emperor travelled around the country in 1868 to strengthen the new regime. Emperor Hirohito travelled around the country after the Second World War. Emperor Akihito, while at times trying to bring the Imperial Family closer to common people, has also kept his distance. His televised speech after the Tohoku earthquake and tsunami in 2011 was the first ever prepared televised speech by the Emperor, which also showed the magnitude of the disaster. In this speech, he urged his people not to give up hope. Emperor Akihito and Empress Michiko later visited people who were in a temporary shelter.

Emperor Akihito has expressed his regrets about the Second World War, travelling to Saipan in 1995 and various War Memorials around Japan. Around four years ago, before the 20th anniversary of his enthronement, the Emperor expressed concern over the fact that the Japanese were forgetting the War. He reportedly said that, “What I am rather more concerned about is that history might gradually be forgotten. The 60-plus years of the Showa Era taught us many lessons. I believe it is essential for us to learn from the historical facts and prepare ourselves for the future.”

Japan is currently entangled in maritime border disputes with several countries and has just elected one of the most nationalist legislatures in its recent history. Whether the Japanese people share the concerns of their Emperor is a question only time can answer.

Posted by Chamara Sumanapala at 6:08 PM No comments:

Japan Votes in a Confused Election

Around two fifth, if not more, of the Japanese electorate, is either unwilling to vote or are undecided as to whom they should vote for in the country’s election. These include a large fraction of its younger population. Japanese society is ageing rapidly and politics has been largely an old people’s affair in most of its modern history.

The current election has become a confusing affair because of more than a dozen political parties involved. They have come to the forefront because both the Liberal Democratic Party (LDP) and the Democratic Party (DP) have lost their popularity. The Japanese people, disappointed with the LDP, handed over the power to the DP three years ago, to be disappointed even more. However, many people are not prepared to call back the LDP to govern them. 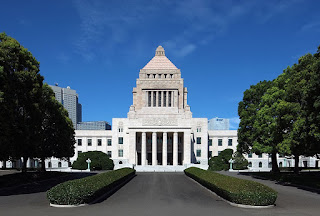 Some of the new parties are just weeks old in name but not old when it comes to the people involved. The Japan Restoration Party (JRP) is a new party only because it is the result of the merger of two other parties. The eighty year old popular former governor of Tokyo, Shintaro Ishihara, left his job to assume the leadership of a reformed “Sunrise Party.” He promptly merged it with Osaka mayor Toru Hashimoto’s Japan Restoration Party. The resultant alliance retained the name JRP and is led by Ishihara, a vocal nationalist. Meanwhile, a large splinter group of the Democratic Party parliamentary group has joined hands with the popular governor of Shiga Prefecture, Yukiko Kada, to form “Tomorrow Party.” While the latter has not shown much promise, the JRP is set to become one of the bigger parties in the new lower house in the Japanese Diet.

Despite its low popularity, the LDP is poised to become the largest party in the newly elected lower house of the Diet. The Japanese Diet, or the National Kokkai, is a bicameral legislature. The lower house, or the House of Representatives, has 480 members, out of which 300 are elected in single member constituencies and the others are elected in a proportional representative system across eleven block districts. Despite the decline in popularity, the LDP is the single most popular party in Japan today. Therefore, it will most probably win the majority of the 300 single member constituencies in the election and will also win a substantial portion of other 180. Even if it fails to win a majority, the LDP could form a coalition government with the support of moderate right wing parties such as the New Komeito Party.

The main issues of concern to the voters in this election are the economy, the future of nuclear power and the prevailing regional political environment, dominated by the ongoing maritime border dispute with China. The Japanese voters are at a loss when they try to figure out which party stands where about certain-especially economic-issues.

The Japanese are in a dilemma when it comes to nuclear energy. They do not want to live with it, but cannot go without it. Despite the fact that the support for nuclear power nosedived after the Fukushima disaster, the zero nuclear parties, who want to see Japan phasing out nuclear energy completely, enjoy little support. The main reason is that these parties, spearheaded by the Tomorrow Party and the Japanese Communist Party (JCP) have not been able to propose viable alternatives to nuclear power.

The quest for energy sources is the primary motivation in pursuing an aggressive stance over the maritime boundary issue. This has rejuvenated the nationalists in Japan, such as Shintaro Ishihara, who is so anti-Chinese that he denies the occurrence of the Nanjing massacre. The 75th anniversary of the event was commemorated by China just three days before the Japanese go to polls and the Chinese people consider the event as a ‘forgotten holocaust.’

However, the average Japanese is reluctant to jump into the bandwagon of extreme nationalism of the types of Ishihara. Their alternative is the leader of the LDP, Shinzo Abe, who has also taken up a hawkish attitude over the issue. Nevertheless, Ishihara remains a relatively popular figure. A survey carried out by Yomiuri Shimbun between 23rd and 25th of November indicated that twenty percent of the respondents preferred him as Japan’s next Prime Minister, although the JRP as a party is not that popular. It is true that the Yomiuri Shimbun is a conservative newspaper and has predicted a much higher percentage of votes for the JRP than the surveys by other organizations. But Ishihara's ideas have struck a cord with a certain section of the electorate and it might play a part in helping the LDP to regain power.

Posted by Chamara Sumanapala at 8:20 AM No comments: