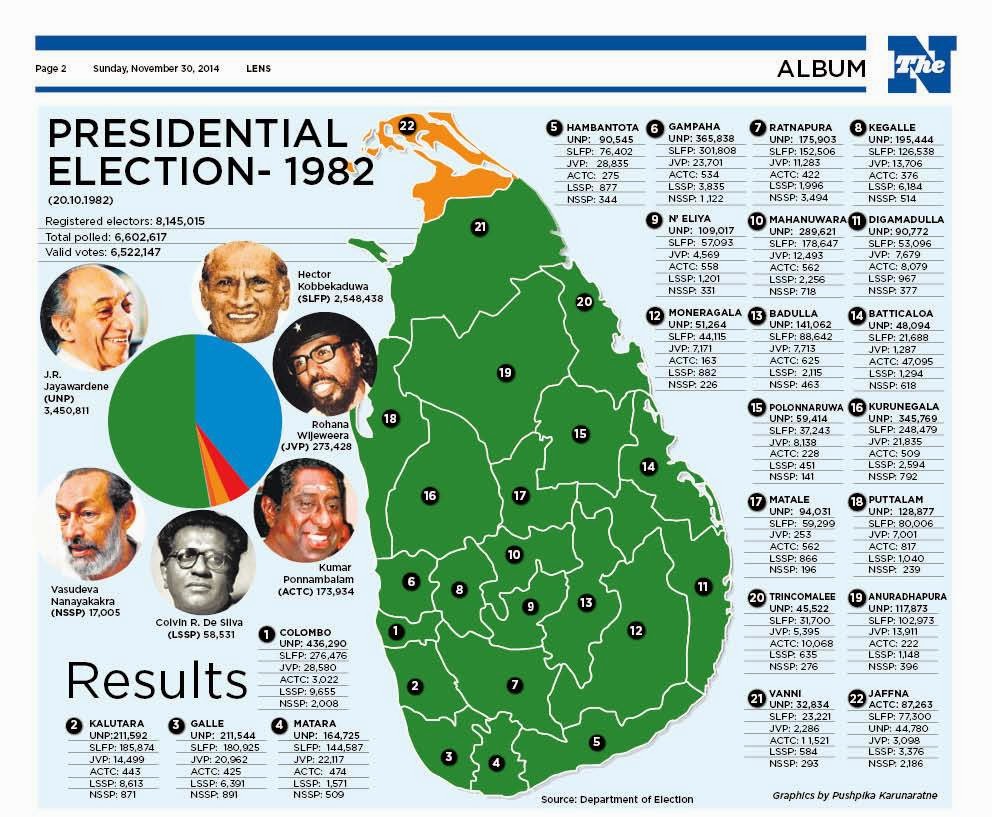 Although the executive president was to hold office for six years and give oaths on February 4 after the election, JR Jayawardene saw the political currents starting to go the other way in early 1980s. The leader of the Sri Lanka Freedom Party (SLFP), former Prime Minister Sirimavo RD Bandaranaike, had been deprived of her civic rights. The SLFP was on one side licking its wounds while on the other side adding more wounds by engaging in internal power struggles. The 1980 July Trade Union Action had been a watershed moment in Sri Lanka’s political and trade union history. It had destroyed the backbone of the trade union movement.

Deprived of any meaningful voice within the parliament, the opposition took the battle against the government to the streets. This new opposition was represented on one side by the youthful members of the SLFP spearheaded by young leaders of the likes of Vijaya Kumaratunga, Chandrika Bandaranaike Kumaratunga and Ossie Abeygunasekera. On the other side there were the new forces on the left, such as the Janatha Vimukthi Peramuna (JVP) led by its charismatic leader Rohana Wijeweera and the Nava Sama Samaja Party (NSSP) which had broken off from the Lanka Sama Samaja Party (LSSP). Meanwhile a more militant alternative force was showing its first signs of emergence in the north.

President JR Jayawardene perhaps sensed that the currents were turning in an irreversible manner and decided to take control of the situation. On August 27, 1982, the Parliament passed the Third Amendment to the Constitution allowing the president to seek re-election after four years in power. Soon after, the president called for a presidential election, the first ever in Sri Lanka.

The presidential election was a new phenomenon for the island nation. It was the first time the whole country was becoming a single constituency. It was going to be an all island contest between individuals. JR Jayawardene had an advantage on the outset as the president and the leader of a unified party. Other opposition parties were either too small or too divided to challenge the UNP.

The SLFP was in a crisis as to who should be the candidate of the party. Sirimavo Bandaranaike, who could not contest, wanted her son Anura Bandaranaike to be the party’s candidate. Meanwhile, there was a sizeable group within the party against the idea of him contesting. These, mostly the younger members of the party, wanted Hector Kobbekaduwa to be the SLFP candidate.

Kobbekaduwa was an exemplary politician, so much so that he had lost almost all that he owned due to politics. The Minister of Agriculture in the 1970-77 government, he was 66 years old, a decade younger than JR Jayawardene. He had attracted a lot of criticism from his family as the land reforms had lost them considerable amounts of land. His brother had divided even the ancestral home to two to claim his half after land reforms. When Vijaya Kumaratunga and a few others went to meet him, they had a hard time convincing Kobbekaduwa to contest.

“My house has been divided. My shirts are all patched up. I am broke despite being a Cabinet Minister once. How am I supposed to lead a campaign? Please find another person,” he had reportedly said. But Kumaratunga had been adamant and said that they will somehow fund the campaign. After fending off various underhand acts against Kobbekaduwa’s candidacy, the young blood of the SLFP managed to get the approval of the party.

Nominations were accepted on September 17, 1982 and six candidates came forward for the first ever presidential election of Sri Lanka. Apart from the UNP and SLFP, four other parties put forward candidates and there were no independents. The LSSP leader Dr. Colvin R de Silva represented the old guard of the left. There were two more left parties, the NSSP put forward Vasudeva Nanayakkara and the JVP leader Rohana Wijeweera also contested. Meanwhile, arguing that Tamil votes should go to a Tamil candidate, the All Ceylon Tamil Congress (ACTC) leader Kumar Ponnambalam also contested the election. Meanwhile, the main Tamil political party, the Tamil United Liberation Front (TULF) did not contest.

Nevertheless, the LSSP was being challenged by the two left forces which represented a new radicalization of the left. The JVP had led a rural based violent revolution to overthrow the government in 1971. The insurrection was ruthlessly crushed and its leaders imprisoned. But after his electoral victory, JR Jayawardene pardoned the JVP leadership and allowed them to enter the mainstream politics. The JVP made clear that it was rejecting armed struggle and embracing electoral politics. In certain areas, especially in the southern province, it made a considerable impact on the political arena. For example, in the Galle by-election in December 1979, Lionel Bopage of the JVP polled almost 10 percent of the votes, far exceeding Victor Ivan, a former JVP leader, who contested from the LSSP ticket.

Meanwhile, the NSSP also represented a younger but small force which had broken off from the LSSP old guard.

The election date of the 1982 Presidential Election was set for October 20. While the UNP campaign moved forward, the SLFP campaign had to face two threats, namely the state intimidation and internal challenges. Many of the speeches of the SLFP campaign rallies had been recorded and some of them were used as evidence to arrest Vijaya Kumaratunga and several others on trumped-up ‘Naxalism’ charges by the government. Many years later when he was in the UNP, Anura Bandaranaike said on a TV interview that ‘Vijaya and his friends might have not known what the word Naxalite really meant.’

However, at the time of the election, Anura Bandaranaike and a few others had distanced themselves from the SLFP, reportedly mocking the candidate, Kobbekaduwa. “Our candidate even does not have money to buy petrol to his car” Bandaranaike reportedly said.

Nevertheless the campaign went on. Kobbekaduwa was given a hearty reception by the people in Jaffna. Given that a Tamil politician was also contesting this was something extraordinary. Kobbekaduwa, as the agriculture minister of a government which had promoted self sufficiency may have had respect in the eyes of the Jaffna people. They had been hit really hard by the open market policy of the UNP. For them, Kobbekaduwa might have been a hero. Since he was the only likely candidate to defeat JR Jayawardene, a sizable section of the people in Jaffna saw him as the best alternative to the president.

One major ‘political coup’ by the SLFP stalwarts was printing a replica of the ‘ration book’ which had been discontinued under the UNP government which was elected in 1977. It was Ossie Abeygunasekera who masterminded the ‘coup.’ It was a political manifesto, with a catchy line “Janathavagen uduraagath bath patha navatha janathava athata” (The rice ration deprived from the people, back to the people).

However the election was done in a background of intimidation by the government. JR Jayawardene had a considerable popularity and political thuggery and election fraud complemented any shortcoming in his popularity. He carried all but one of the electoral districts, and won in many of the constituencies. However, JR received a rude shock when Ponnambalam and Kobbekaduwa pushed him to a distant third in Jaffna District.

Nevertheless the election had ended with a resounding victory for Jayawardene. But the ominous signs of the need for change were glaringly evident and could not be hidden by fraud and intimidation. Jayawardene received only 20 percent of the votes in Jaffna when Kobbekaduwa polled 35 percent and Ponnambalam polled 40 percent. Meanwhile JVP leader Wijeweera received 15 percent of the vote in Hambantota District and passed the 5 percent mark in a few other districts as well. This was a rude shock to Dr. Colvin R de Silva as well. The LSSP leader only received 58,531 votes (0.90 percent) while Wijeweera polled 273,428 (4.19 percent) of the vote. The eclipse of the old left was on the cards from the 1982 Presidential Election, if not before.