Today, Valentina Vladimirovna Tereshkova marks fifty years of her life as a celebrity. Exactly half a century ago, dressed in a space suit bearing the now long discarded Soviet Flag, she was propelled to space and to fame. The 26 year old former textile worker from Yaroslavl became the first woman in space on June 16, 1963. 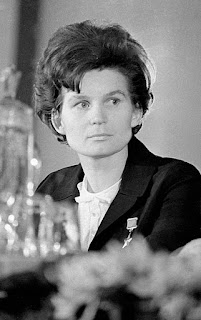 
Her father, a tank leader sergeant in the Soviet Red Army, died during the Winter War against Finland when Valentina was just two years old. This may have played a part in Valentina’s eventual selection to be the first woman in space. Her proletarian background as a worker and the fact that she was a child of a war hero is said to have partly motivated Nikita Khrushchev to make the decision to send her on the Vostok 6 mission that June. Her fresh looking face also helped as the Soviet leader noted that her image as the first woman in space would become a long time propaganda asset to the party and the state.

After Yuri Gagarin’s pioneering space flight in April 1961, Sergei Korolev, the head of the Soviet space program, came up with the idea of sending a woman to space. Five women were selected by the medical selection board in late 1961 for the program. In early 1962, they started their intensive training program which included both theory and practical components including rocket theory, spacecraft engineering, weightless flights, isolation tests, centrifuge sets, pilot training and parachute jumping.

After the success of the Vostok 3-Vostok 4 missions in August 1962, the Soviets came up with the idea of launching a similar project involving two women cosmonauts. However, this plan was revised in early 1963 to include one male and one female cosmonaut instead. On June 14, 1963, Vostok 5 mission was to carry Valery Bykovsky to space. Two days later, Vostok 6 was to carry the first female cosmonaut to space. In May, Tereshkova was selected for the mission with Irina Solovyova as the backup and Valentina Ponomaryova as reserve. Both Tereshkova and Solovyova took the journey to the Baikonur Cosmodrome in present day Kazakhstan, prepared for the space flight. Solovyova, the backup, was there to take Tereshkova’s place at short notice if an emergency occurred. Nothing unexpected happened and Tereshkova was sealed inside the Vostok 6. After a countdown of two hours, she was launched to space.

Tereshkova’s call sign during the mission was “Chaika” (Seagull). She orbited the Earth 48 times in the three days she was in space and conducted tests on how the female human body would react to space conditions. Despite all the propaganda, some suggest that her performance was criticized by some scientists in the Soviet space program. However, no other woman went to space for nearly two decades.

After her flight, Valentina Tereshkova became a valuable propaganda asset to the Communist Party of the Soviet Union (CPSU). Lucy Ash of the BBC has argued that “Tereshkova’s life was hijacked by the party.” Before the end of the year, she had married Andrian Nikolaev, the only bachelor out of the first five Soviet cosmonauts. This was perhaps the wedding of the year in the Soviet Union and Nikita Khrushchev himself gave away the bride. Their daughter, Elena Andrianova Nikolaeva-Tereshkova was the first child born to two space travelers. When the couple separated, it required the approval of the then Soviet leader, Brezhnev.

Valentina Tereshkova’s image has been carefully preserved, first by the Soviet regime and then by the Russian government. She held numerous posts in the CPSU and became a symbol of the Soviet Union abroad. She effectively became a useful propaganda tool for the party and the state. After the collapse of the Soviet Union in 1991, she lost her political positions but not her fame. Tereshkova later returned to politics as a member of the Russian Duma of the ruling United Russia Party. She is the deputy chairperson of its foreign affairs committee.

Despite being a politician for many years after her voyage in 1963, Tereshkova has not lost her passion for space. She meets with her fellow members of the female space program and is very interested in the activities concerning space. Recently, she expressed her willingness to travel to Mars, given the opportunity, even if it turns out to be a one way ticket. “We know the human limits. And for us this remains a dream. Most likely the first flight will be one way. But I am ready,” she said recently at a press conference in Star City, outside Moscow.

Posted by Chamara Sumanapala at 11:05 PM